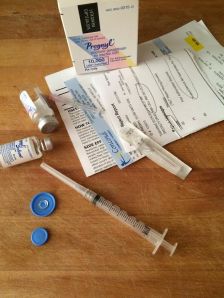 I had an ultrasound done last week that showed I had two huge follicles (24.8mm and 24.5mm ) on my Left ovary and none on my right. I got the whole, “WOWZAS! These are big and both might drop, which means twins are a possibility” talk. We’re fine with that. The Doctor was very happy with the way I responded to the changed dose of Clomid this month (and I’m happy too – emotionally I haven’t been crazy – yet…).

So, on top of the Clomid this month they decided to have me do a trigger shot in the ass to force ovulation and then onto timed intercouse (yay for romance). It basically guarantees you’ll ovulate in the next 36 hours or so. Now, as I start this story, let me say I am not weary of needles. I donate blood twice a year, I watch when I get stuck by a needle, I don’t get queasy at the sight of blood, I watch surgery on TV while I eat, and I’m not grossed out by much of anything.

So, Kevin and I watch a few good ole YouTube videos of how to mix it, draw it, and get it all ready. Pretty cool that you can see it all online. I watched a couple of videos of husbands giving their wives the trigger shot, too. Everyone says, “Oh – that didn’t hurt at all. That was so easy.”

I go into this totally confident that it’ll be a wham bam thank you ma’am, one and done kind of event. We’re already running late to a birthday dinner, but the Dr stresses the importance of doing this shot ASAP.

I tell Kevin to get the air bubbles out and not to kill me. I was totally just fucking with him and knew that I’d need more than that syringe of air to kill me. This of course makes Kevin a bit nervous. He suggests we wait and have my mom do the shot if there’s a chance he kills me. I’m all like, “No. You won’t kill me. Come on. Quit dicking around. We don’t have time for this. Just stab me.”

I will now give you a MS Paint demonstration of how the trigger shot went. (I am for MS Paint hire if you needs these mad skills.)

1. My empty kitchen and cat. Everything is calm and quiet.

2. Kevin tells me to lean over the counter so he can get a better angle. I feel the 1.5″ needle go into the hilt. I’m fine with the pain.

3. Kevin gives me the shot and as he’s injecting it I start feeling like death. I thought I was having an allergic reaction. I’m woozy. Dizzy. I’m nauseous. I’m shaking. He tells me to stay still because I was bleeding. I stumble to the counter, with no balance.  Click the pics to read the words – however, none of what I said was intelligible, that’s just what I was trying to say…

4. I move to the sink and start dry heaving. I’m shaking. Kevin’s trying to find a bandaid, clean up the blood, and keep me steady.

5. Kevin tells me I should sit because I’m so unsteady. I sit back on my knees and this is the last I remember doing. Also, according to my dope MS Paint skills I’ve gained about 75lbs in a matter of seconds.

6. Kevin says that I face planted into the dishwasher and then slid all the way down and smacked my head on the tile. As in, I smacked my head so hard it bounced back up and came back down. The next thing I remember is him shaking me and yelling at me to wake up. He sounded like he was in a tunnel.

Please note: I feel terrible about my ill timed joke of possibly killing me, considering for a split second we both thought he might have. This event is hilarious now, but horrifying in the moment.

I woke up in a cold sweat, jittery and my ears/head were ringing. Apparently I’d had a Vasovagal Response. I basically lost oxygen flow to my brain and blacked out. My mom (nurse) assures me this is common and no big deal. That was the most horrifying 30 seconds of my life that felt like it was going on for hours. I mean…hours. My head is still killing me. I look like a train wreck because I’m not brushing my hair since it hurts so bad. I’m lucky I didnt split my head open.

So, it’s been a pretty exciting past 10 days. How are y’all?

12 thoughts on “Come on, you won’t kill me. Just stab me and let’s get this over with.”