I believe I’ve mentioned ED to y’all before. ED is the controlling dickhead in my life. He judges me when I pick something less than healthy to eat. He mocks me when I start to feel good about myself. He dictates when and how much I should eat. He’s brutally mean to me and speaks to me in a way I’ve never let anyone else. ED is my Eating Disorder.

I now know and understand that I have an eating disorder. I waffled on that one for a while because it’s not the stereotypical Eating Disorder. I’m not the thin, gaunt girl on Thinspiration boards – though I won’t lie – I have looked at them. I’m the pleasantly plump, over the top, brazen bitch that fights her inner demon while worried about if our table orders the small or large cheese dip – no jalapenos, eats a ton, gets really upset after and spends hours trying to figure out how many calories are in it and how much exercise it’ll take to burn them off.  Thankfully, ED is not nearly as active in my life at the moment, but I know much like any addiction, ED is always looming in the back of my head waiting for an opportunity to pounce and tell me how shitty I am. Currently, ED is hog tied in the back of the Healthy Living Wagon that I’m driving.

Over the weekend, Alicia (bff) and I took a stroll down memory lane and read through some of my old journals as a child. Parts of it broke my heart. At the ripe age of 12/13 years old, I wrote this in my bomb-ass Keroppi the Frog diary: 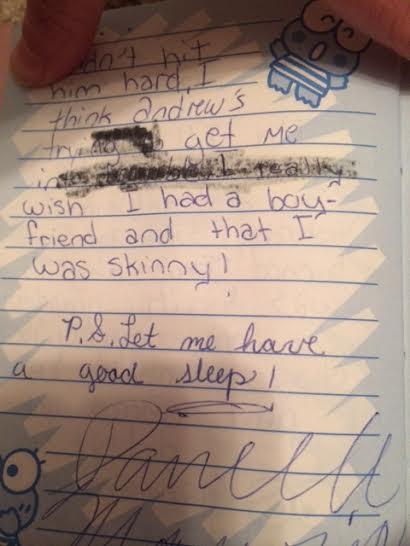 Also, interesting that at barely 13 I was already having sleep issues. Then at 16 I wrote: 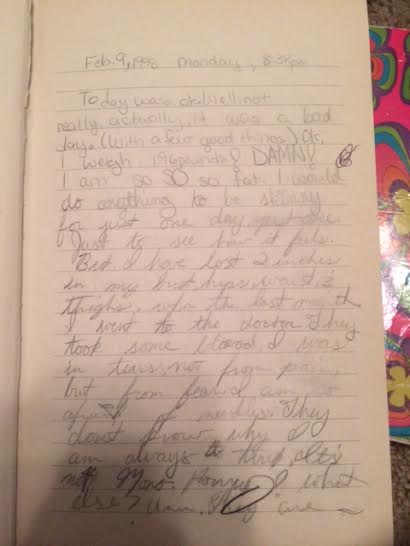 I’ve been battling the scale and ultimately myself for a very long time. ED has been in my life for a very long time.  This line stuck out to me, “I would do anything to be skinny for just one day. Just one. Just to know how it feels.” Honestly, I still don’t know what “skinny” feels like, but I do know what healthy feels like. I like “healthy.” I am finally healthy. I just wish I could tell my 12 year old self to get off the damn scale and go play outside – like a kid.

ED is chomping at the bit this week. We found out that Bliss (my cat of 8.5 years) has kidney failure. Needless to say, I am not coping well. Between my miscarriage, my grandma, the basement catastrophe, my car getting hit, a multitude of other things, and now Bliss, all within 4 months, I just can’t take another effed up event. I’m taking him to our old (preferred) vet tomorrow for a second opinion. We’ve already given him one round of subcutaneous fluids – which means we’re putting my cat on an IV line, with an 18 gauge needle, holding him still and pumping 250ml of fluid into him, oh and rocking a sharps container at the house now. I’m praying for a miracle and a misdiagnosis because this  big ol’ baby has my heart.

I won’t lie, stress causes ED to start gnawing at the ropes, trying to creep up anyway he can – over exercising, under exercising, binging, restricting, you name it. My 30 Days of Running was turning unhealthy and obsessive, getting up at 430am to run and then again when I get home –  so I switched that to 30 Days of 30 Minutes of Moving My Ass. That seems to be working a lot better. 30 minutes is usually an hour, but by choice.  My weekend was gluttonous but I checked that quickly and my body feels better now. ED will not rear his ugly head this time. I love my new found sense of body acceptance and healthy living lifestyle I have far too much to let ED out again.

Thirty million Americans will suffer from an eating disorder at some point in their lifetime. Wrap your head around that. If it’s not you, someone you know has an ED in their life. Spread the word! Talk about it. The only way to get rid of all the EDs in the world is to address them.

For those of you with EDs in your life, how do you manage the beast?