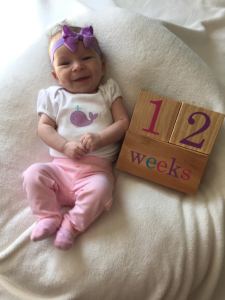 Yep. It was just as awful as I thought. My only saving grace is that the ladies that work there are super sweet and Brooke doesn’t seem particularly upset when we get there. But… I have a few legit concerns about daycare.

Let me start by saying that I once worked at a daycare. I feel like I could do some dateline special on all the seedy underground shit at daycares. I know all the sketchy shit that goes on and I wish I didn’t. God, I wish I didn’t. Fudged ratios, teacher favorites, the list goes on and on of unmentionables.
Runner Mom’s kid is 11 days older than Brooke, which means they go through things 11 days before us. This is fantastic for me because I get to read her blog and talk to her and calm my anxiety filled ass down some. I heard all about her first day at daycare and high expectations for Brooke’s first day.
So, we showed up Tuesday and NOTHING WAS READY FOR US. Runner Mom got a fucking welcome sign for her kid and all I got a “uhhh…I haven’t had a chance to set her spot up yet,” as I watch her bounce a kid with each foot, bottle feed one, and try to entertain one kid flipping his shit in a high hair next to her. I remembered reading how they took Runner Mom’s kid out of the carrier before she even realized it and how at ease it all made her. I on the other hand wanted to turn around and head home. I just stood there, frozen in all of the mommy guilt ever and started crying. Ugly crying. Hard ugly crying. Like a sad sack-a-rooni. Somehow she hands a few kids off while I’m trying to get my shit together and she awkwardly hugs me and tells me it’s always hard for mom. I tell them she eats on demand at home, and to just use common sense: if she seems hungry and rocking/soothing/snuggles don’t calm her, then feed her. I tell them her likes and dislikes. I walk through her typical napping routine. I finally take Kevin’s hand and cry all the way to the car, in the car, on the way home, at home and sporadically throughout the day until I pick her up.

Part of our ungodly expensive daycare includes things like an app that gets updated throughout the day to let you know how your little one is doing. (From an IT Standpoint, this app is terrible. Brilliant concept, terribly designed app. Someone get on this. Hello, clip art.)
Anyhow, I refreshed the app like an addict and after what felt like an eternity of not seeing anything I really started melting down. They have the ability to send pics on the app, as well. I kept refreshing for a picture. For two reasons: the first being that you’d think with a new parent dropping off who is a massive

train wreck you’d send a pic of their kid to reassure them that everything is okay and the second reason being, clearly this means EVERYTHING IS NOT OKAY. So, then I was convinced they hadn’t sent me a pic because she’d been crying hysterically all morning and they couldn’t take that picture and send it. I finally just called so I’d stop driving myself crazy. They said she’d been doing fine. Doing well. Not crying. I listened closely trying to see if I could hear her cry in the background. I could not. About 10 minutes later I got a picture. I inspected her eyes very closely and she didn’t appear to have been crying.

Then the app gets updated and sure enough, they gave her 3, 3oz bottles with 1.5 hours in between! Holy shit! She’s NEVER had that much. That’s 9oz in 4.5 hours. WHOA! For reference, she typically has 24-30oz in 24 hours. I knew she’d be a reflux’y miserable mess when she got home. Ugh.
I come back later and the same kid is in the same high chair in the same spot still flipping his shit. Deja Vu. There’s a new face in the middle of the room bouncing Brooke in her arms, frantically shushing her and holding her paci in her mouth. At least Brooke’s not screaming.
I get Brooke home and she sleeps. And then she basically sleeps all day Wednesday.
Thursday morning we go in and I give them 3, 2.5oz bottles and tell them to give them every 2.5hours. I still boo hoo and have that awful feeling in the pit of my stomach, but I still leave.
Thursday afternoon I pick up and she’s on the changing table getting a new outfit. I ask if she had a blowout and the following interaction takes place:
Me: She had a huge blowout this morning. Did she have another one?
Her: No, she’s just wet around the neck.
Me: Like, from sweat? Or pee? Or what?
Her: I’m not sure.
Me: *smells shirt* It smells like vomit. Did she throw up?
Her: No, she didn’t.
Me: Hmm – smell this. This is definitely vomit.
Her: *smells shirt* Yes, that smells like vomit.
Me: So, if she didn’t throw up was she laying in someone else’s vomit?
Her: *pointing to a bouncer* That’s the bouncer she…
Me: *before she finishes* There’s no vomit on it. So, either she vomited or has been lying in someone else’s vomit. I’ll keep an eye on her tonight.
Her: Sounds good!
—-
DA FUQ?! You don’t know if my kid puked on themselves of not?! I don’t expect you to watch her sleep, but ffs, please know if she yaked on herself or not. Because if she yaked while sleeping, HELLO PULMONARY ASPIRATION and if she was sleeping in someone else’s yak – wtf. Hygiene. Gross. No.
About 10 minutes after we get home she starts puking. Everywhere. Projectile. After puking two more times we call the pediatrician and go see him. He says it’s probably just a virus she got at daycare. She continues vomiting into the next day and at about 1p I call the pediatrician back and he says we need to take her to the ER because she’s probably dehydrated by this point. She vomited a total of 8 times in 24 hours.

We get to the ER and that’s a whole clusterfuck. There’s some Muscles McGee English paramedic kid trying to get a needle stick on her with his fat sausage hands and ultimately blows two veins in her feet before giving up. Brooke is screaming a cry that Kevin and I have never heard, Muscles McGee has blood all over his hands and the blanket she’s on. I’m trying not to lose my shit. Thankfully, that team finally gives up and tells me I can nurse her before they try again. I KEPT telling them a large part of the reason she was so upset was because she was starving and hadn’t nursed in 4 h

ours and since she had thrown up she had nothing in her stomach. They gave her Zofran so she could eat, but all they heard was “CRAZY MOM TALKING.” Also, wtf wouldn’t you suggest that I nurse her and try and hydrate her a little before you go fishing for her tiny vein? ANYHOW – I nurse her and the 2nd team comes in to try and fortunately she got her vein on the first try. She gets some fluids and thankfully all of her labs came back normal. They discharged us with some more Zofran and agreed that she had a brutal tummy bug. We got her to the ER in just enough time that they didn’t need to her admit her for dehydration. No more puking since!

We snuggled for most of the weekend which was exactly what she needed. She’s feeling a million times better. That shit was crazy.
Kevin tells me my metaphor that she’s being bottle boarded with germs at Guantanamo Baby Bay is probably a little much, but whatever…that’s how I see it. 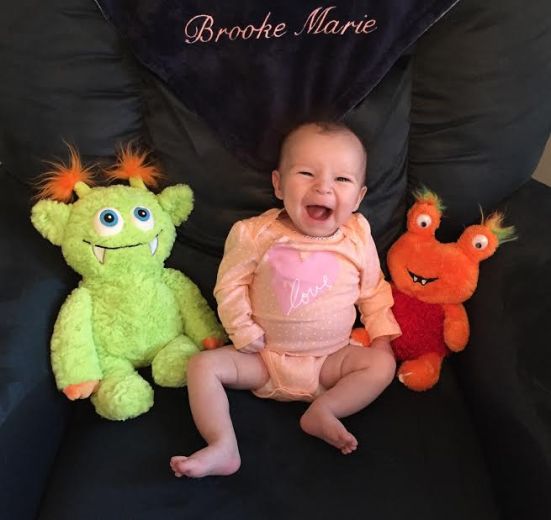 *I wrote this a few days ago, but just now have a second to publish it while pumping. ❤