I have to say it: I WAS RIGHT. Looks like my Western University of Google Medicine Medical Degree was spot on. Seriously though, if you think something is wrong and it’s in the pit of your stomach folks, chances are something IS wrong. Don’t push your mother’s intuition aside. You are your child’s biggest champion and advocate.

When I initially took Brooke to the Pediatrician it was because I suspected a tie, but he pretty quickly dismissed that saying he didn’t see anything glaring, but would refer me to an ENT to err on the side of caution since he isn’t an expert in lip ties (ie. get a crazy mom out of his hair). The Pediatrician seemed to think it was more likely that she just wasn’t latching well and we needed to work on that. Funny fact: a lot of Pediatricians don’t think lip ties are a thing. They quickly dismiss them and will tell you they are a myth. I’m super glad I didn’t get totally dismissed by him and he sent me to an ENT.

Well, we met with the ENT and he confirmed that Brooke has a significant lip and tongue tie. He explained that it was significant enough to cause all of the issues we’ve been experiencing. I brought a list of all of the symptoms we were experiencing and it was as though we were going through a checklist for a tie:

Every single symptom she has is an indicator for a tie. 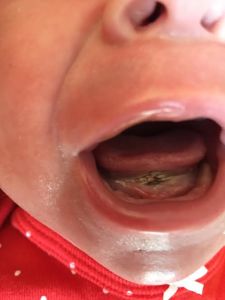 They explain the procedure as one where they they take her, clamp her lip, inject her with a numbing agent, and then cut the ties with a pair of scissors, bring her back to me and then have me try to nurse her – though only 50% of babies will nurse after. How terrifying? Hey, I know we just cut your tongue and lip, but would you go ahead and eat?

They have me swaddle her and so they can go clip her tongue and lip tie. The nurse tells me that she will be back in about 5-6 minutes with Brooke. The second they left the room I hit the timer on my FitBit. I could hear Brooke screaming bloody murder the whole time. Tears in my eyes and Kevin doing his best to distract me from it. At 5 minutes and 58 seconds the door opens and she’s back in my arms. Still sobbing hysterically with me about to join her.

She immediately latched and nursed like I’ve never experienced. There was milk everywhere! She’s not used to being able to suck efficiently and eat so well. I had ZERO pain and it suddenly felt how the LC described: a soft pulling sensation on my nipples. The ENT told me it’d take a few days for her to re-learn how to eat. It was so strange to have her eat and happily unlatch after 15 minutes total. She’s nursed a couple of more times since we’ve been home and has been pretty fussy, but shit, I would be too. She’s had a little Tylenol and is now sleeping peacefully.

For the first time I’m glad I’m 32 and with a newborn. Had I been younger I don’t think I would have had the patience or willpower to nurse through the pain I’ve been experiencing. I think I probably would have given up on the breastfeeding journey. Breastfeeding has controlled our lives and being a first time mom whose soul goal was to breastfeed, I didn’t know any better. I thought nursing for 45 minutes on each breast was normal and to be expected. I thought her nursing every hour or so was fine. It takes a toll on you at night when you’re up every hour to hour and a half because she’s hungry and then nursing for over an hour. But – because I was so determined to breastfeed I put my discomfort and sleep deprivation on the back burner, chalking it up to overly sensitive nipples and the dreaded exhaustion they talk about for new moms. It wasn’t until I realized something was wrong with her that I started investigating.

Brooke is currently a Brooke-urrito and knocked out cold. I think she finally has a full tummy. I do have a lot of guilt that my sweet, sweet girl has been hungry for the last almost 8 weeks and I wasn’t able to fix it earlier. I tried to explain it to Kevin like if he, and he alone HAD to make every single meal for me and every single time I ate I would cry and scream after, but have to continue eating – how awful he would feel.  It’s the best way to describe how I feel. She should start to gain more weight now.

Anyhow, the ENT is hopeful that this fixes most, if not all of her issues. It’s still possible she has GERD, but we’ll cross that bridge if and when we have to. For now, I’m going to remain hopeful that we are on the road to recovery.