Yesterday was a day of firsts…and most of them sucked.

First time pumping. My Lactation Consultant told me to wait until 4-6 weeks postpartum (PP) to pump; I pumped at 5 weeks and change. I hated every minute of it. Not only does it add like 78 steps to my morning, between cleaning and shit, it’s just so miserable. Some women don’t mind it, but so far, having pumped twice, I am not one of those women. It’s too mechanical and impersonal. I was able to pump between 2-3 ounces these last two mornings alternating breasts while Brooke nursed from the other one. I’ve been told this is good. I have no idea. I’m only pumping because I need to build a little bit of a stash for when Brooke is at daycare twice a week come March.

First time giving a bottle. I cried. I mean legit tears streamed down my face. I hate that too. I LOVE nursing her, but I know that I have to teach her to eat from a bottle, too. She hated it. I’d nurse her until she was calm, do the old bait and switch, she’d flip her shit for about 3 minutes and then I’d let her nurse again. After about 10 minutes of that, I was finally able to get her to take a bottle, with Kevin priming her cheek and her giving me some serious side eye. Cue the water works. It hit me that I WILL be going back to work in March and someone else will be feeding my baby. It’s a tough pill to swallow, to think about someone else taking care of my world. I am incredibly fortunate in that I’m only going back to work two days a week, but still, even those two days are hard to handle. Kevin and I are touring the daycare we think she’ll be going to this coming Monday and I’m going to try to keep my shit together. Having worked at a daycare when I was younger I know the kind of seedy shit that happens and quite frankly, it scares the hell out of me. Anyhow, all of that hit me yesterday as I was holding her and watching her drink from a bottle. I felt so…disconnected. I’ll probably continue to bottle feed her once a week just to make sure she can do it. She had a hard time pacing herself and for the first time since she’s been born, puked everywhere after drinking it. I watched liquid gold spew from her like a geyser. Just awful.

First day dairy free. Queso free. Cheese free. Ice cream free. Milk free. Yogurt Free. Cabot Sharp Cheddar Free. Cream in my coffee free. FLAVOR AND HAPPINESS FREE. Yes, that’s right, this self proclaimed cheese queen is going dairy free for at least a month. Brooke has been having gas that is getting increasingly worse. She’s got a lot of the tell tale signs of a casein allergy/sensitivity: gas, fussiness/pain while eating, discomfort, she’s on the low end of the weight percentile (29th percentile), her little bottom gets red, and her stools still haven’t turned “scrambled eggy” yet and are more watery than anything. So, because of all of that, I thought it was worth a shot. It kills me to think that perhaps my diet is causing all of that. So, thanks to Dr. Google, I’ve decided to try dairy free for a month to see if that gives her any relief. Everything I’ve read says it takes a month to see any real relief: two weeks to get out of my system and two weeks to get out of hers. Her pediatrician told me he didn’t think I needed to cut the dairy out quite yet, but my thought is that why prolong it if I’m going to need to in the future? Y’all – dairy is in EVERYTHING. Coconut milk is fucking disgusting with it’s lumps of fat floating in it. Cashew “Ice Cream” isn’t much better either. I miss flavor and happiness already.

First postpartum period (of sorts). WHAT IN THE ACTUAL FUCK? Exclusively breastfeed and you won’t get your period, they said. Well, they lied. They were all liars. After 5 friggin weeks of disgusting lochia I had ONE day of spotting and was like, “Oh finally!” and then over night the flood gates opened up. To the point where Kevin insisted I call my OB to make sure I wasn’t going to bleed out on him, especially since I was have quarter sized clots. They are having me come in today to do an ultrasound, make sure everything looks good and to place my IUD (no babies for a minute). No one tells you that your first postpartum period is absolute hell. I woke up a couple of night ago in absolute writhing pain. In fact, I woke Kevin and had him take the baby because I had such bad cramps. I actually thought I had food poisoning. It was totally my period starting. I’d gained 4lbs back and was flipping out. Bloating. Yay! I’d been eating all of the chocolate and also extremely cranky. NOW WAIT FOR IT – I wrote this all about 4 hours ago, the ultrasound looked good. My OB said it’s NOT my period. He said that PP bleeding can be an absolute bitch and ebb and flow. And flow rather heavily. He said it can go away for 2 weeks and come back with a vengeance. So, now, WHAT IN THE ACTUAL FUCK? So, yay, this won’t/shouldn’t be a monthly occurrence, but probably more like a totally random, unpredictable, don’t wear white because you never know occurrence.

After all that crappiness – here’s some cuteness: 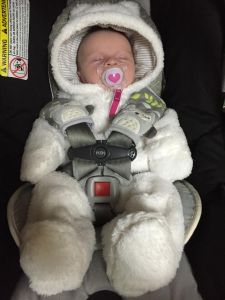 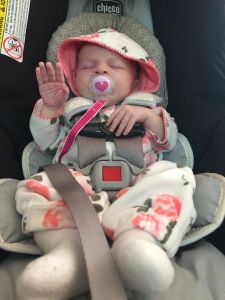 4 thoughts on “All of the firsts”