*I’ve gone back and forth for nearly the last week waffling on if I wanted to share this or not. Is it too early? Is it too soon? Will I jinx myself? What if the unthinkable happens? But alas, SMF is my therapy. My outlet. My safe place – with nearly 2,000 people reading. Sometimes I feel like I know you all better than I know some of the people I see on a daily basis. With that being said, I’m not announcing anything in my personal world yet – no PSA on my personal Facebook (yet) – so if you know me and want to say something – do it to my face or in my SMF realm, please. I’ m not quite ready for the public sphere of it all. I’m still wrapping my head around all of this. Hopefully, this explains why I’ve been so quiet for the last month. For some reason, pressing “Publish” makes me feel very vulnerable…but here we go.*

We looked at condos to buy on the beach. Right on the water. The kind where you stand on your patio and the ocean is calling your name. Where I can walk out of front door and hit the sand for a run.

We went boat shopping and as I laid on the sun deck and closed my eyes I could hear the waves crashing. I could feel the sun on my face and Kevin’s hand intertwined in mine. There were no pitter patter of little feet, or grubby hands tugging at mine. And for the first time, in a long time, that was okay.

We even started planning a week long all inclusive vacation for later this summer in Jamaica…or maybe the Dominican Republic…or Mexico. The options were limitless.

We both got the exact same fortune on the day they think I conceived.

And then, the morning of the half marathon, something felt…off. So, on a total whim, I took a home pregnancy test at 3am and went back to bed. When we got up at 430am for the half I went to throw it away, just knowing it was negative, and instead, found myself staring at two very pink lines.

The ONLY maybe, possible symptom I’d had was the constant nausea for the past week…and even that would have been early.

Seriously – for all my other crazy TTC folks, that was it. No sore boobs, no creamy CM, no metal taste in my mouth, no headaches, no extreme exhaustion, no rampant crying, nothing. Nada.

I really didn’t think I was pregnant, but something kept telling me to test.

So, after standing there for a solid 30 seconds, I started screaming.

Me: I don’t know. They’re not accurate after like 5 minutes and I did it in the night. I didn’t think I was!!!

Kevin: We’ll swog it together.

Kevin: We did it.

It’s hard to completely wrap my head around this after two losses and considering a child free life. It’s mind-blowlingly scary. I thought I would be over the moon excited, but I’m currently too wrapped up in my own fear. My SIL asked when I thought the fear might go away and it might not be until I’m holding this healthy baby in my arms.

I started brown spotting the day after the half up until about 6 weeks. So, for a solid 2 weeks I spotted daily, mostly brown with the occasional pink thrown in for real nerves and panic. (Poor Kevin – every bathroom trip ended with full detailed results, me asking him what color he thought the spotting was, or me crying.)

My progesterone dropped (17.4 to 15.3) so they started me on Progesterone supplements given our history. More panic. (Though, they assured me 15.3 was still in the normal range – 11-47 is normal in the first trimester.)

They put me on bed rest as long as I was spotting. So, I laid there in bed for 2 weeks consulting Dr. Google with every single twitch and pain I had. Working myself up even more.

In order to keep my feet grounded I continued planning our all inclusive vacation – you know, in case things took a turn for the worse. I know, I know. That’s probably terrible, but after two losses it’s the only way I could assure I wouldn’t be writing these posts from a loony bin. We went in for our first ultrasound last week and the entire way there I just kept talking about beach service, white sand, and clear oceans. I’ve determined it’s Kevin’s job to be overly optimistic and my job to be brutally pessimistic. 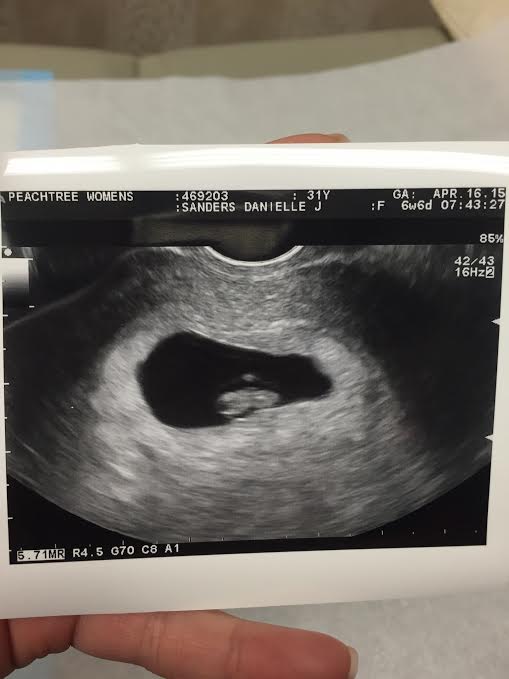 Everything looks perfect right now. The growth is perfect. The heartbeat is 141. My OBGYN says we are at a less than 5% chance of another loss. (This site also brings me comfort – as of today I’m at 2.6% and this site.) My progesterone has risen so much (15.4 to 41.4) they’ve cut my supplements back to only once a day instead of twice a day. They said the brown spotting was old blood and it’s my body clearing everything out to make room. They aren’t scared. They aren’t worried. They keep telling me I shouldn’t be either. Easier said then done, though given our history.

My OBGYN is fantastic. My NP is an angel. The whole office makes you feel like family. They know me by name since I was there so often with fertility treatments. My OB is good to me and knows how petrified I am, so he ordered my next ultrasound for two weeks instead of the standard four weeks. Which means we get to see Lil Baby Fat(titude) next Thursday (4/30).

So, fingers crossed. It’s still early, but developmentally – we’ve never made it this far. The first time all growth stopped at 6w0d (despite not finding we’d had a missed miscarriage until 10w3d) and it was rocky from day one and the second time I started miscarrying naturally at 5 weeks. And today, today I am 7w5d with movement and confirmed development at 6w6d…and everything looks perfect. My OBGYN uses the word “healthy.” Everything is “healthy” for the first time ever.

I’m working on being wildly optimistic instead of scared out of my mind from the “what-ifs”.

31 thoughts on “The Unexpected”