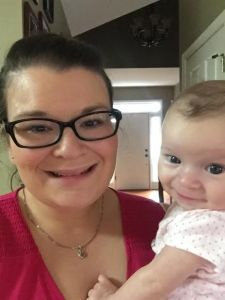 It’s not all bad. I promise. I could fill page after page with all of the amazing little things Brooke does that just melt my heart, but they’re all things you truly don’t understand until they are your own flesh and blood. The first time she rolled over you would have thought it was the second coming of Christ with the excitement in our house. We were cheering and celebrating. A bit later, after she had done it several more times Kevin and I both looked at each other and commented that we’d seen other babies roll over and it was no big deal, but when Brooke did it… game. the. fuck. over. We have a God Damn Genius Baby in this house.

She’s a morning person. She wakes up in a good mood every day and is always smiley and chatty. It’s funny how quickly you can forget that you’ve only had two hours of sleep when there’s this sweet girl that is beyond happy just because you’re looking at her. The way she smiles up at me when I change her diaper in the morning erases the previous night’s lack of sleep. It’s okay, I tell myself. It’s only sleep. It won’t be like this for long.

She’s rolling from her back to her front as though it’s never been something she couldn’t do. It’s fluid now. She started that a few weeks ago. Another sign that she’s no longer a newborn. Every time we put her on her back she rolls right onto her tummy and pushes up. More recently, in the last couple of weeks or so she’s started trying to army crawl. She pulls her knees up tight to her chest and pushes off, launching herself forward. She goes the length of her pack n play and is royally pissed off when she’s reached one end and can’t keep going. Kevin and I are very aware that we are going to be in a world of hurt in just a few short months if she’s already attempting to crawl.

She’s worked through most of her gas and colic and is pretty happy for the most part. She has a quick temper and a mad foot that just gets a stomping when she’s pissed off about something. Her mood can change at the drop of a hat if you do something she isn’t fond of. She’s a lot like her mama – all or nothing. The girl can commit to a melt down and even after she’s no longer upset she’ll look at you and make these little annoyed fusses to let you know she still isn’t pleased that you ever let it happen. Whatever “it” is.

I’ve put myself in boobie juice bootcamp for the last week and it’s definitely been paying off. I’ve gotten my supply up tremendously, but there’s not much I can do about my storage capacity. My mom kept her on Friday and I got 6 hours of uninterrupted sleep, but when I did wake up at 5am to pump I still only got 5 ounces in total. I was ecstatic about that though. I can wait an hour after she eats and pump and can get about 2oz. I find myself feeling engorged and uncomfortable at about 3 hours after she eats now, which seems to be about perfect for her schedule. (*Thanks everyone for the bf’ing supply increase tips. I’ve tried all the lactation enhancers (brewer’s yeast, fenugreek, etc.) and while they do work they REALLY increase her gas and make her miserable.*) 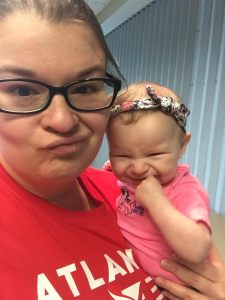 I told her it was nap time.

While the sleep regression has been tough, we are working on finding a better routine that suits Brooke. I’m now having to put her down for a nap instead of just wait for her to fall asleep. I know that’s probably a dumb rookie mistake, but hey, first time mom here. We don’t really get the luxury of her daycare putting her on a schedule since she’s home more than at school. In fact, she doesn’t typically nap at daycare and crashes around 6pm on those nights. Anyhow, I’m doing a mix of a bunch of schedules (Moms on Call, EASY, and 2-3-4) and creating something that works for us. Her current day looks a little bit like this, mind you in fell swoop it can all turn to hell and look nothing like this – but I think it’s a pretty good schedule….

8am-6pm – RIGHT…. Hahahahaha – ya’ll thought I’d figured out a good schedule.  Who knows, man? This shit is hard. There is no rhyme or reason for this child’s madness. Naps? Sure. Usually. For how long? 15-30 minutes if I put her down. 2 hours if I want to sit down and do absolutely nothing for 2 hours. Nursing? Yes, with what feels like every 20 minutes; however, it’s probably more like every 1.5-3 hours depending on the day and her mood. Here’s the kicker – I’m perfectly fine with it. Oddly enough, given my serious type A self.

6pm – We start winding down. Some nights she’s in her bassinet by 630pm and sleeps soundly until she wakes up at midnight to nurse, but most nights she goes down at 7pm and will wake a few times, just fussing, where Kevin will go upstairs and get her settled back down and she wakes up every two-three hours to eat throughout the night. Most recently she has decided that sleep and bed are for the weak and she’d much rather be a part of the night life crowd downstairs. So, we bring her back down. Truth be told, we could spend forever trying to get her back to sleep, have to holler and scream, and then sit down here waiting for her to start up again, OR we can just bring her back downstairs and let her snuggle with us downstairs. We are probably creating awful sleep habits by doing this, but hey, it’s working for us currently. I’m okay with it. And when it’s not working for us and we aren’t okay with it – then we will fix it.

She is also perfecting her gymnurstics form. (See what I did there?) She loves twisting and contorting while nursing. Her feet typically find their way to my face.

She is the epitome of perfection and I truly cannot remember life before her. And I’m not quite sure I want to. Sure, it’s hard, but my God, every single moment is worth it. I never realized my heart could hold so much love. 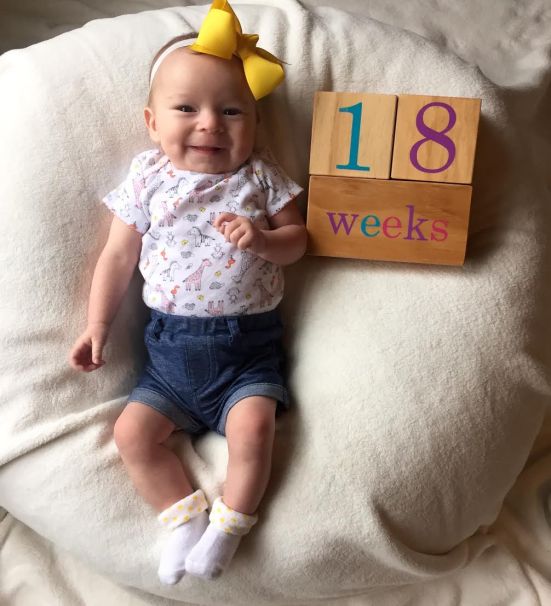 PS – I’ve been writing this for 2 weeks. Life is busy now. I miss y’all and really need to find a way/time to make sure this happens.

2 thoughts on “Epitome of Perfection”