It was a very precise moment when I thought to myself, “Shit…maybe I’m crazy like the rest of them.” Then were several additional times that confirmed my initial thought, though not realized until the storm had passed. I feel like I’m a part of the Insane Clomid Posse. See what I did there?

Situation 1: It was about 6,000 degrees in my office. I’m sweating like a whore in church and fanning myself. I look ridiculous. In fact, I look like a retarded bird trying to fly with how rapidly I’m waving my hands to move air, frantically searching for paper to make one of those fancy fans you would make in elementary school. My coworker, whom I temporarily share an office with, and I’ll refer to as…Bruce*, notices me and my rapid fanning. By this point I’ve turned on my desk fan and have my face propped in front of it while still fanning myself. Bruce informs me we have the “coldest office in the building, and he likes the room chilly, but it’s awfully cold.” Bullshit. I wait a total of 15 seconds before I hit my breaking point and stand up, walk to the thermostat and go to turn the air down when we have this interaction:

I bite my tongue, as I nearly said, “Get the fuck out.”

Thankfully, I caught myself, and instead said, “Look…it’s lava hot in here, Bruce. I’m dying. My skin is literally turning into lava. I just can’t….”

I give zero fucks and turn it down to 60. I realized at that moment that maybe the Clomid is called “Clomood” for a reason. Perhaps the initial happiness I was experiencing was the euphoria of an “infertility plan.”

Situation 2: I had WW3 over bread at dinner with my husband.

Him: Do we have any bread?

Him: Where is it?

Me: *pointing* right there

Him: Can I have some?

Me: Because it’s not for tonight.

Him: But I’d like some bread with my dinner.

Me: Oh well. It’s not bread night. So, too bad. That bread is for tomorrow night.

Him: We can buy more bread?

Me: Nope. There is no need to buy more bread because you’re not having any tonight. Besides, it’s a “take and bake” loaf. You have to bake it before you can take it. And since I haven’t baked it – you can’t take it. So, no. No. You cannot have bread with dinner.

Him: Alright…I’m gonna take a shower.

Me: WHAT? ARE YOU MAD? ARE YOU SERIOUS? YOU DON’T NEED ANY FUCKING BREAD.

-he’s already upstairs by this point and my lava skin is erupting again. I stand over an air vent for 30 minutes. I feel bad, but stick to my guns. I still refuse serving that specific bread with dinner and instead make biscuits. 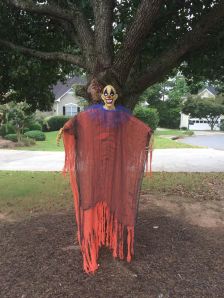 Situation 3: If you know me, you know that Halloween is my thang. I love it. Growing up, my family did a Haunted House that started at the front door and then would wind through the garage. We built hallways by hanging sheets and created pathways. There were at least a dozen people that “worked” the Haunted House and I just have the best memories from it. People from all over would come. It was tons of fun. So, now, I am slowly, but surely accumulating my Halloween décor and will, at some point, open our own Haunted House. I love it that much. Alas, I digress. So, I’ve put out all of our Halloween stuff outside. My newest addition being this 6ft tall clown with red glowing eyes. I’ve got lights, and strobe lights, and fog machines, and creatures and characters all set up. It’s pretty effing awesome. I should take a picture of the whole set up. Anyhow, I’m driving home from work the other day and pull into my driveway to see that my neighbor has hung a small, chevron pumpkin on their front door. Well, in my Clomid mind, this bitch was challenging me. I mean, seriously, she had JUST had a baby and now she’s trying to take Halloween from me, too? Can’t I have ONE FUCKING THING? I just knew that she was trying to outdo me. I was OUTRAGED. It wasn’t until I was at Target, throwing things into my cart, angrily whispering things like, “This bitch. This trifling bitch thinks she’s gonna win at Halloween. She must not know me. I swear to God.” with had a cart full of Halloween items that I had my “fucking Clomid” moment and put it all back. Like a totally rational, normal person.

I won’t lie, there have been a ton more…but in attempt of some sort of self-preservation, I’ll leave it at those three. You get the point…

On a Weight Watchers, weight loss note, my work schedule has shifted into four ten hour days instead of the traditional five eight hour days.  Which means my schedule and eating times have changed. I’m a character of routine, so it’s a learning curve for sure. It doesn’t help that the Clomid has made me absolutely ravenous. I mean, stupid hungry.  Like, I’m mid meal and already thinking about my next meal hungry. The, eat all of the foods ever hungry.  And I did. Every single one of them.  BUT – I also tracked them all. I tracked every single gluttonous point. All ONE HUNDRED AND FOURTY TWO of them. If you’re wondering, yes, the three cheddar bay biscuits from Red Lobster, chocolate cake and ice cream, Wendy’s, Taco Bell, movie theatre popcorn, chicken wings and whiskey were 100% worth it. When weigh in day rolled around yesterday, I thought about bailing. I thought about the huge gain I knew I’d have. But I also thought about how it’s a new month, a new chance for change and a fresh start. I got up and ran and then I went to weigh in. I went and I LOST 0.4lbs. I don’t know how I managed to lose half a pound, but I did.

Kev and I are running a 5k tomorrow, while one of my besties runs the half marathon. She tried to talk us into the half, but I laughed and said hell no. I will say though, her suggestion is what got me thinking about it and ultimately registered to do a half marathon in March.

So, here’s to October – a new month and a fresh start.